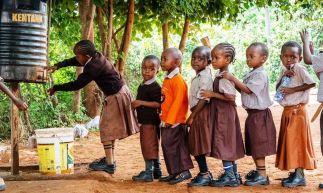 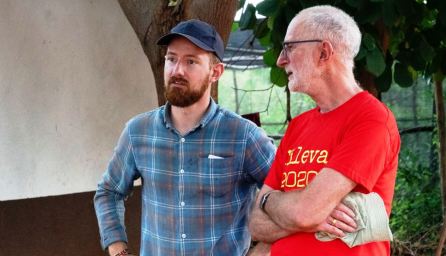 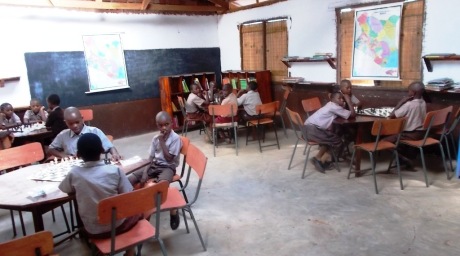 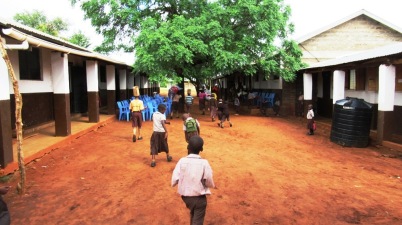 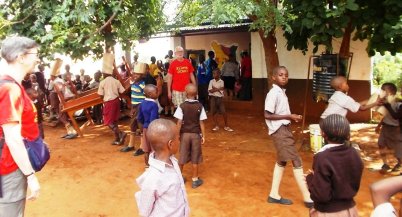 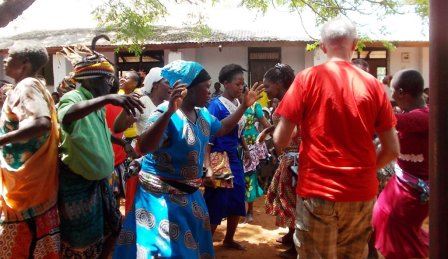 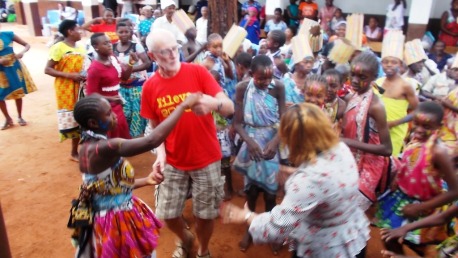 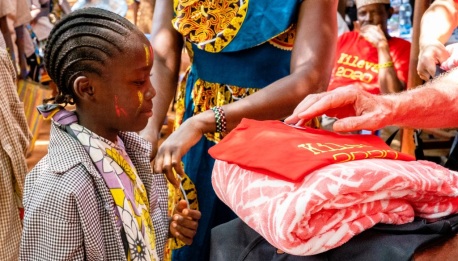 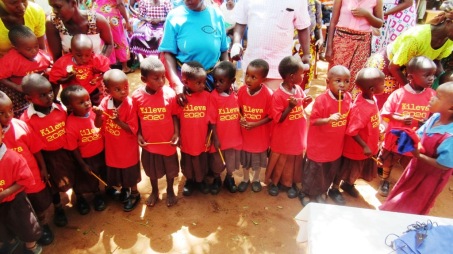 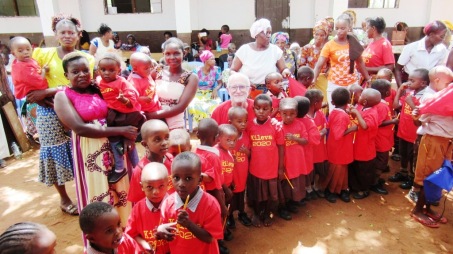 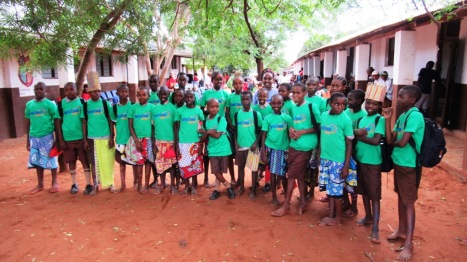 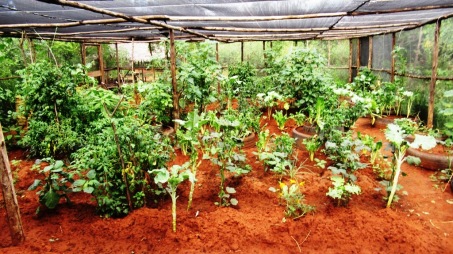 When I walked down the street where the bus was waiting for the kids early in the morning I was greeted by a feeling of excitement and lots of laughter. The kids were eager to start their trip to Taita Hills Sanctuary and so was I. The private reserve is located close to Tsavo West National Park and inhabits more than 50 mammal and 300 bird species. I heard, that many of these kids have never ever seen big animals (except crop-raiding and disturbing elephants) in the wild before, so we took classes 5 to 8 of the close by Kileva Primary School and started our trip.

I felt reassured about the kids’ excitement because they have been writing little reports about their experiences. I just MUST quote some of the phrases they mentioned, simply because they truly made me smile. All of them have been looking forward to this special day. As one of them wrote: “I am so lucky, I said to myself while I was entering into the bus.” and “The trip began. Soon we were puffing merrily up the country. Our joy plastered with laughter like a barren woman who is privileged to get a child.”

Once we arrived in the park a guide greeted the kids and showed us around. He explained to them the importance of wildlife for Kenya and was even able to show them a compilation of skulls. Before we entered the park, he also urged them to follow the park rules and to always pay attention to the animals around.

A group of zebras roaming in the savanna (Photo: Annemarie Russ)

We were very lucky that morning and saw lots of different animals. I was really impressed by the density of elephants and zebras. I am working with the “Elephants and Bees Project” because my love for elephants runs deep. However, I have to admit zebras fascinate me a lot as well and I am not alone in this as one of the kids stated: “l liked the color of the Zebras, it was very beautiful and shiny. Although I didn’t like the sound of Zebra.”I absolutely agree. I cannot even explain the sound zebras make. One would think it might be something similar to a neighing horse, but it is definitely not. To me it sounds more like a weirdly high pitch barking dog.

Another child  described our encounter with a warthog like the following: “On our way we met warthogs running as fast as lightning chasing each other.”Yet, one of our highlights were the two lionesses we found resting under a tree. We actually saw them twice. Once on our way in and once out. They didn’t move a centimeter. Did you know that the word for lion in Swahili is “Simba”? Learning about it created an aha-moment and I automatically had to think about Disney’s “Lion King”. Most of those kids have never seen lions in real life which is why one of them wrote: “We were very excited like a king in the palace when we saw the lions.” 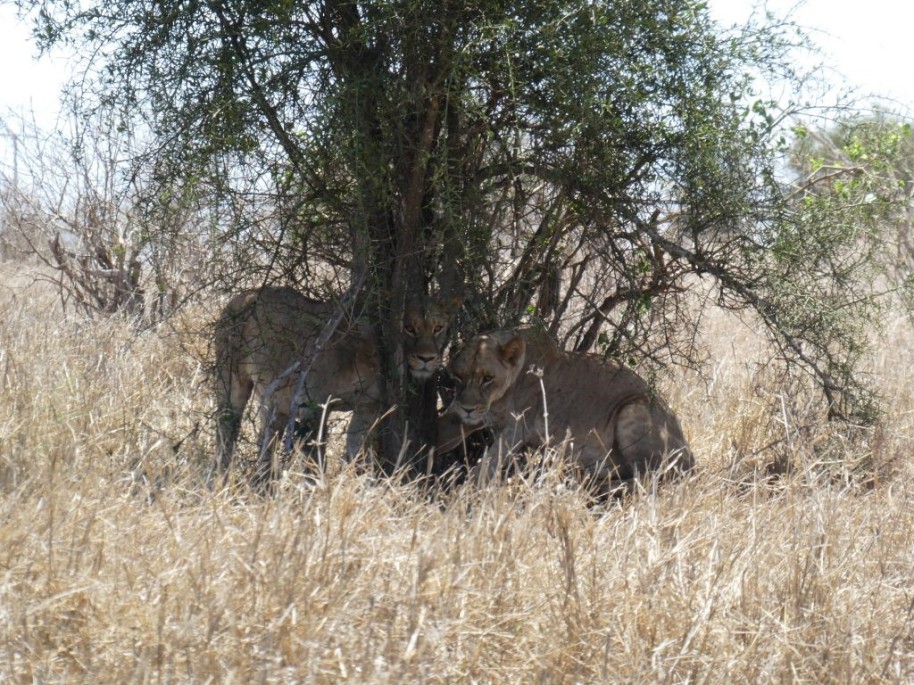 On our way through the Sanctuary we stopped at Salt Lick Lodge to get a view over their waterhole. Due to the dry season and lack of water in the area an enormous amount of wildlife had gathered around the waterhole.  I didn’t count exactly but there must have been more than 100 zebras and 40 elephants from different mixed family groups. On top of that we saw some Hartebeest, Baboons, Impalas, Waterbucks and Buffalos mingling with the rest. The view was breath-taking.

The kids are watching different animals gathering around the waterhole at Saltlick Lodge (Photo: Annemarie Russ)

A mixed elephant group making their way to the waterhole (Photo: Annemarie Russ)

According to Eyewitness Travel’s Kenya guide there is no finer place in the whole country for close-up views of elephants.  This place is amazing. Another kid later wrote: “I never imagine that in Sarova Salt Lick there were houses. My eyes almost popped out of their socket on seeing that in the middle of a forest. I thought houses were only on the reception, but I was wrong. The place was beautiful I ever imagined. I did not want to go home.”All of them appreciated the animals but also the Lodge environment a lot and sometimes I felt like they did not know what to look at first.

An elephant enjoying its day at the waterhole (Photo: Annemarie Russ)

The school kids learning about the different animal species that are gathered around the waterhole (Photo: Annemarie Russ)

Reading about their experiences offered me many new insights as well. It showed their differences and interests. Every kid seemed to pay special attention to some other details. Some of them mentioned the darkness in the morning and how hard it was to go to school so early without having light. Others were even afraid to encounter hyenas on their way. Several kids focused on the delicious lunch we had and claimed it to be “as delicious as the forbidden fruit”. Quite a few of them were really excited to see a little plane parked at the entrance of the Park for the first time, while others have never seen water sprinklers before. It was all very insightful, and I got the feeling that everyone learned a lot this day.

So, what can I say to sum up this post? It has been a great trip for everybody involved. By the end of the day everyone seemed very satisfied. Seeing those kids being so excited, happy and full of joy filled my heart with warmth and I am happy that I was able to share this incredible experience with each and every one of them. This is what made this trip very special for me as well and I will not forget about it for sure.

Asante sana for taking me!­­­

The views, opinions and position expressed in this article belong solely to the author and do not necessarily reflect the policy and position of Save the Elephants