As many of you will know the primary school year in Kenya runs from January to December and consists of 3 term as follows:

At the end of each term all pupils take exams in at least English, Kishwahili, Maths, Science and Social Studies/ Religious Education. Using the results from the exams taken at  Kileva Eastfield during this year, I’ve compiled the charts below.

The teachers are aware that there is room for improvement in some areas (for example maths) but it’s encouraging to see that the trends were  generally positive from the second to the third term, so congratulations to those that contributed to the improvement and good luck in 2015!

Trend from term 1 to term 2

By taking the difference between the average percentage score achieved in each subject by each class in term one and term 2, the trends shown in the following chart can be observed. 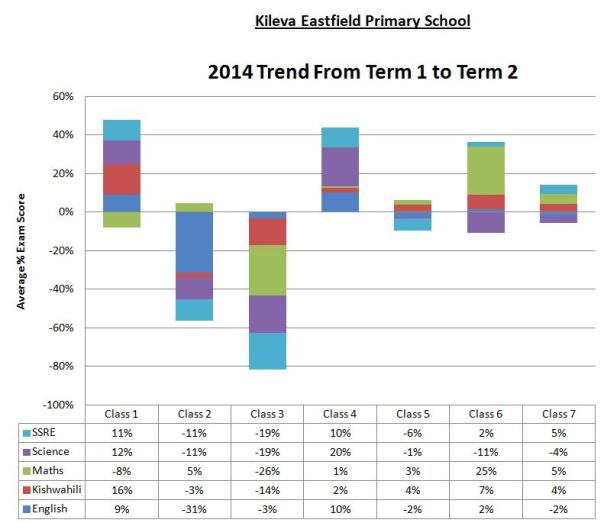 The classes with the largest downward trends were Class 2 & 3.

Trend from Term 2 to Term 3

The next chart shows the trend from term 2 to tern 3.

This shows that although all but two of the classes showed negative trend in maths, there was encouraging improvement in almost all other subjects across the board, and this time it was only class 1 that showed positive improvement in all subjects, so again many congratulations to them.