One of the interns on Lucy King’s team that’s building the Human Elephant Co-Existence Centre (HEC Centre) near the Kileva Eastfield school is  Tara Easter.  Tara has been recording some of her experiences on her blog site at http://taraeaster.blogspot.co.uk/, and I’ve taken the liberty of reproducing some of these below.

In the bush of Kenya, certain tools and materials can be in short supply. Whether it’s out of the budget or simply doesn’t exist in the local shops, many construction workers, farmers, landscapers, and families have to make do with what they have. This is certainly the case in Mwakoma, and the innovation I have witnessed from our work crew has been incredible.

Our main building, which will serve as an office, honey processing room, dorm, community center, library, meeting hall, and educational facility, was set into place thanks to string, sticks, and a right angle tool.

Our campsites are level and flat and beautiful thanks to, again, sticks, string, and a leveler. 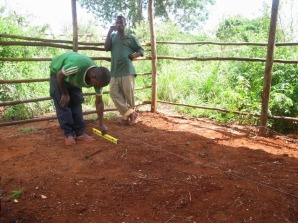 Our perfect, cylindrical, cement toilets with proper seats were framed onto some plywood tied together with wire and sticks in a circle. These guys had never made a toilet like that before. Mostly, their long drop lous are topped with [scary] holes in the floor, but when we showed them a drawing of what we wanted they figured out a way! 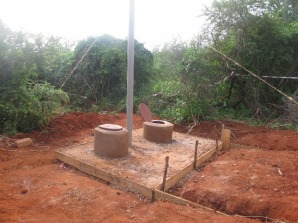 Again and again I come to them with a problem and they come up with the most unusual solutions. Need a high tech metal saw to cut some mabati? No problem, just hammer a panga across it in a line. Wire cutters gone missing? Just smash it with a mallet!

I like to think that I’ve learned a little from them as well. The shower has been the bane of my existence the past week. Convinced that it was a small enough job that we didn’t need to pay men to do, Carley and I were determined to finish it on our own. First, we had no idea how to attach the gutters without the usual attachments and roof to nail it to. Instead, we hammered nails in to make a hole and tied them together with fence wire. Then, to protect our tarp from mold and dirt, we needed to roll it up a bit. I needed a clamp, but I knew I wouldn’t find any in Voi. Solution? Repurposing plastic! We took the heads from water jugs and cut them in half to fit around the poles. 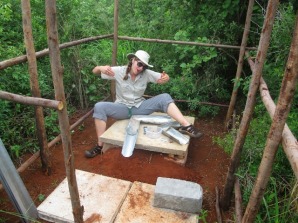 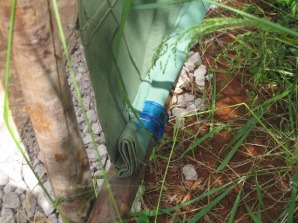 According to Nzumu I am Tara: fundi of the shower! I’ll take that!

A glimpse into the life of Dr. Lucy King

There is no such thing as a schedule in Kenya. You can make a plan for the next day and even have back-ups for your “what if” scenarios, but it’s all useless.

Carley and I returned to Mwakoma after our Christmas break, excited to take on the challenge of project management in the absence of Lucy. On the day of arrival, we thought all we had to do was have a quick meeting with our fundi, Nzumu, to discuss the next two days’ work, and surely we’d have camp set up well before dark. Of course, that’s not what really happened. Our driver needed more money for his bus fare back to Nairobi which we didn’t have to give. Chief Alex wanted to share mingi (many) stories. And silly us, we had to have known that we would need to buy more materials for the constructionimmediately before the stores closed through the rest of the weekend (nothing is open on Sundays)!  Duh.

Add in the typical “faff time” in Voi and it wasn’t until 8:30 when we had finished setting up our tents that night. We had fried eggs and PB&Js for dinner.

I’ll admit, I’ve held some grudges over the lack of time allotment for showers and food and those basic needs in the past, but after being the only on-site supervisor having to solve all the problems, including bandaging sliced fingers and running back to Voi for forgotten supplies, I will never be upset over a short day turned long again unless it was my fault. One day, Nzumu even had to come tell me (the one who gets angry when she’s hungry) that it was time for lunch.

To get things done in Kenya, I’ve learned that I just have to roll with the punches and keep on keeping on. You may get a call at 8:00 at night saying a truck with our bricks that was supposed to arrive two days ago is on its way now, only to find out at 1 am that, in fact, they are not coming, again. But that’s just how it goes sometimes.

On the bright side, the hard part is over. We are all moved into our amazing site, and official research on the elephants and bees project has begun! 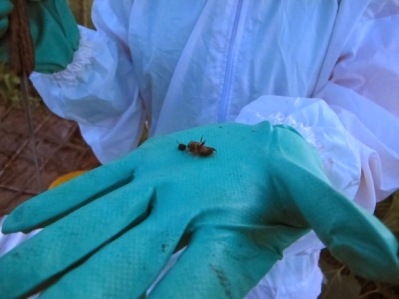 On the last day that Carley and I were on site by ourselves, I was about to crack. Balancing camp life (no, not glamping) with maintaining construction projects that produce an aesthetic and professional product was exhausting to say the least.

I had battled simple tasks meant to take 10 minutes that turned into hours for days. When I finally gave up at 6 pm that last evening, and walked away from a still incomplete shower, Nzumu said he was going to put a superbox onto one of Kakongo’s hives and asked if we wanted to come.

I literally collapsed on the ground.

On one hand I was overwhelmed at the prospect of continuing to work with no one to start making dinner or even to wash the dishes from the day before for dinner. On the other, I wanted to go work with the bees and get something done for the actual project more than anything.

We grabbed our bee suits and off we went.

Getting stung by a bee isn’t that bad, but the thing about African honey bees is that when one stings you, it puts out a pheromone that tells all the other bees to sting you as well. Lucy has been through this unpleasant experience herself. After an uncountable number of stings from three different swarms, her entire torso seized up and she was rushed to the emergency room. So when I could feel bees bouncing off of me, and I watched them crawl around on my face mask, I was a bit nervous. Then I felt like a wimp when we found out later that Nzumu had been using plastic bags as gloves when he has gone out to work without Lucy around. 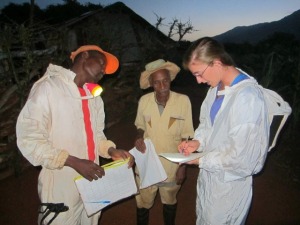 He replied, “Yes, but I don’t mind. They are my friends!”

I’m really glad I pushed myself to keep going that night.

First raid of the season

At around 8:00 on Friday, January 10, 2014, I sat down to the dinner table, starving and exhausted after a long day. As we dished out the servings of stir fry (a treat compared to our usual tomatoes, beans, and rice dish), Nzumu was helping Imran with one last task before he was headed home. As he worked, he casually said “There are elephants in the shambas.”

We explained to him that we must go track them now, and we must know when they are around as immediately as possible for all of our research goals. He told us to meet him after we were through eating, and we will go find them.

I didn’t even chew.

We jumped in the War Horse and began what turned into a wild goose chase. We went from shamba to shamba, slowly piecing together a story. The beating of drums and yelling in Swahili could be heard from every angle – each farmer working hard to try and protect their crops. At one point, after just confirming that the elephants were in a nearby thicket, I witnessed a brave woman walk off into the darkness alone, right into their path. She returned with assurance they were not headed her way.

We always seemed to be one step behind the elephants until Nzumu got a call from his wife, Josephine, telling him they were “climbing in his shamba and hitting the trees” at home. On his own turf, he was quickly able to pick up their trail, and concluded that they were headed for the water pan near Jennifer and Ambrose (two of our beehive fence farmers).

Back to the car we went, certain that we were finally on the right track. We parked and excitedly continued on foot towards the water when were interrupted by an army of safari ants. These fierce little insects cannot simply be smacked away, either. They must be pulled off of your body one by one. After having to literally strip down to shake them out of my pants and off of my skin, I finally arrived by the pan, still feeling a few sudden, pierce bites in my underwear.

After joining my team, I realized there were a few other people there, watching and waiting in an understood silence. Fires burning all around were set to keep Somali camel herders away, so we sat near them to shield the light from a possible ndovu nearby.

Not long after, a large, dark shadow appeared in the distance.

Elephants. Eight of them, maybe even ten. We could see their reflections in the water and watched them drink and blow bubbles. We heard the innocent sparring of two bulls off to the side, and the quiet rumbling of the happy herd. We were downwind and it was dark; they never suspected our presence. Every once in awhile I caught a glimpse of white. I was grateful to still be witnessing a healthy old matriarch with great big tusks.

After awhile, the herd moved off, and so did we. Returning to camp around midnight, I skipped the bucket bath and headed straight for bed. We would be up early the next day, tracking and measuring footprints, talking with farmers and assessing damage.

I tried hard to get a picture of the herd, but their identities remained concealed by the night. In a selfish way, I’m kind of glad I can keep that memory all to myself. First crop raid of the season.

Posted on 24/01/2014, in Elephants & Bees and tagged Elephants and bees, Kileva Eastfield School, Kileva Foundation, Save The Elephants. Bookmark the permalink. 1 Comment.